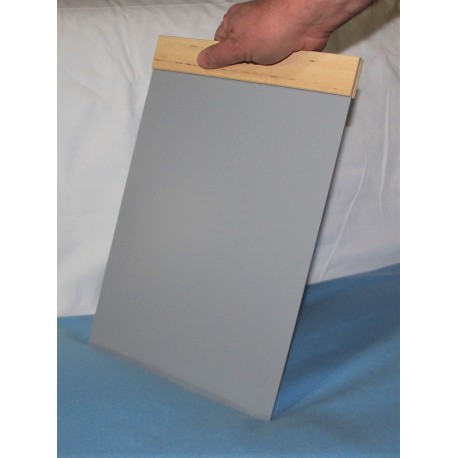 Synthetic foil, formed by the fusion with different types of resins that, rubbed on a 100% wool fabric, rebalances the cellular function restoring the natural electrostatic field for the bioelectric balance

This product is no longer in stock

A cure against all ills exists!
Lamina Bior Life

A cure against all ills exists ... says Dr. MARIANO ORRICO, ITALY medicine scholar, inventor of a simple but extraordinary therapeutic tool in his illustrated applications; a synthetic foil, formed by the fusion of 3 different types of resins that, rubbed on a 100% wool fabric (originally a sheepskin appropriately treated was also recommended), rebalances the cellular function; the benefits are obtained simply by bringing the plate closer to the body. Like all brilliant ideas, we are faced with something extremely simple, inspired by the knowledge already spread by Talete from Miletus in the sixth century BC.

The dott. Orrico starts from the natural law according to which "in the whole universe exists" the presence of positive and negative electric forces.The earth obeys the same law and the human being that is placed on it, does the same. it consists of an electrified body, from conception to death, of predominantly negative 90% and 10% positive charge.This is the result of the research of Dr. Orrico who align themselves with the Nobel Prize for Physics (1903) Antoine Henri Bequerel that affirmed that the negative charge in our body is vital, and that when it is scarce one gets sick and if life ceases, we feed on negative charges in different ways:
1) with breathing,
2) through the skin surface,
3) with food,
4) through the blood e
5) with cellular vibration.

Dr. Orrico stated that the cell membrane of every single cell is mainly made up of negative charges and that its enemy is serotonin, possessing positive charges, if it is produced in excessive quantities as occurs in the intestine, especially when it is constipated or colitic. .
From the studies of dr. Orrico on bioelectrology, Bioelectrotherapy was born, which is applied by approaching the body with an instrument in the form of a resin sheet that does not involve any side effects. The BIOR LIFE lamina, rubbed on a woolen fabric (or even a sheepskin) is charged with negative electricity and brought close to the body to the negative charge cells that an excess of serotonin has reduced so that the cells of the treated area can resume the their normal functioning.
Another Italian scholar, Dr. Eng. Bartolomeo Audisio, also affirmed after various experiments that by restoring the natural electric field the tissues were repolarized and the vital equilibrium was restored. He himself, even before Dr. Orrico, proposed an instrument that he called a "triboelectric plate" that was used in the same way as the Bior Life plate.

It is well known that electric phenomena occur in the cell (we do not have the electrocardiogram and the encephalogram at all), but officially there is no science that is called electrobiology.

These treatments are very simple, but they are based on very precise and advanced knowledge and discoveries, which relate our well-being with a prevalence of negative electrical charges in our cells. And also with the need to download at least this imbalance with a daily contact with the earth that has on the surface a prevalence of negative charge (earthing, grounding, etc.)

The diseases have in common a loss of the negative electrical charge of the cell; therefore, to restore a balance, we have a simple and inexpensive method to transfer energy to the cells.

Take a slab of a special synthetic resin that is electrified by rubbing and held close to the skin on the area or organ we want to treat. That's all! The only important thing required is a little patience! An electric / energetic imbalance that has been produced over many years requires the right time to resolve! From the first application a sense of calm and relaxation will be felt ...

The lamina is proposed by 2 Italian researchers (Alessandro Giatti and Egidio Tullio) who for years have proposed ancient and new remedies to restore wellbeing to those who seek a better lifestyle using natural methods. The studies and experiments of Orrico and Audisio have been resumed and expanded using the new materials available today!

There is no intent to replace doctors or scholars who have always worked to cure diseases of all kinds. Therefore for every pathology it is always advisable to always request the advice and assistance of the doctor.

Rub a clean woolen cloth on the plate once or twice. It is even better to insert the slab into the wool case and pull it out vehemently making resistance with an arm thus creating friction. In this way the plate is charged with electrostatic charges which are retained on the surface. Hold the plate in the wooden part with one hand, taking care not to touch the part